Mia Pham is a senior at the University of Houston. She is in the Honors College majoring in Management Information Systems and minoring in English and Dance. She has been training in dance since she was 7 years old, specifically in ballet. She studied rigorously under a number of ballet masters such as Robert Underwood, Catrina Steele, and Daymel Sanchez. She has performed in many ballet productions such as The Nutcracker, Le Sylphides, and Raymonda. She began seriously training in modern dance when she enrolled at the University of Houston as a dance minor. There she has performed in numerous shows such as Emerging Choreogrpher’s Showcase, Ensemble Dance Works, UH goes to the Match, Barnstorm Dance Festival, The Gala at the American College Dance Association, Dancescape 2020, as well as many other projects in the Houston area. After she graduates, she intends to work at a consulting company while also dancing professionally on the side.

Daniel Davila is a Houston native currently working towards a BFA in dance at the University of Houston where he is a member of the UH Dance Ensemble. He began his dance training at age 17 under Roberta Cortes at the MET Dance Center and has since participated in summer intensive programs at TKB Ballet School and Feijóo Ballet School. Daniel is a proud company member of the Bay Area Houston Ballet & Theatre under the direction of Nelson Madrigal. 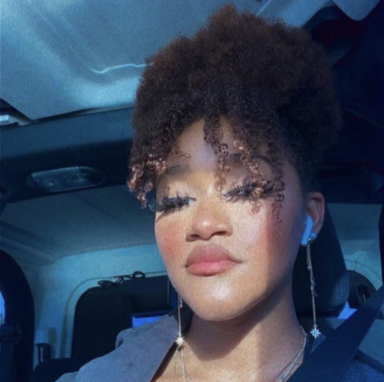 My name is Kaylin Mercado, I am a senior and Dance minor. I have been apart of the DSA leadership team for two years, I was first a member then an ambassador and now I currently hold the Social Officer position. I am also apart of UH Ensemble, the pre-professional dance company.

Verónica Ordóñez is a senior English B.A. and Dance Minor at the University of Houston, and this is her first year in the UH Dance Ensemble. She got her start in movement at age 7 when she began training in artistic gymnastics at Cypress Academy of Gymnastics in Cypress, Texas. At age 14, she transitioned into contemporary dance and ballet at Steppin’ Time Performing Arts Center, and she joined the UH Dance Department during her sophomore year of college. Verónica has performed with UH at Emerging Choreographer’s Showcase in the Lyndall Finley Wortham Theater and in Houston’s Zilkha Hall, and at UH Goes to the MATCH in Houston’s MATCH Theater. She has received additional training through the month-long Gibney Dance Center Summer Study Intensive in New York City. Apart from dance, Verónica is a 2020 Mellon Scholar and conducts research in the neurohumanities. Her interdisciplinary scholarship, “When Words Fail: Narrative and Dance in Posttraumatic Stress” has been chosen to exhibit at Texas Undergraduate Research Day at the Capitol in February 2021, and she plans to defend her Senior Honors Thesis this coming April. She is currently working in collaboration with the UH School of Theatre & Dance and the Brain-Machine Interface Lab in the Cullen College of Engineering to create a dance-technology piece that is slated to be performed in Spring 2022 at the John F. Kennedy Center for the Performing Arts in Washington, D.C. Verónica is looking forward to graduating in May 2021 and working in literary publishing while continuing to dance. She enjoys singing, musical theatre, reading, movies, cooking, and playing with her partner’s cat, Blue. She lives in Houston, Texas.